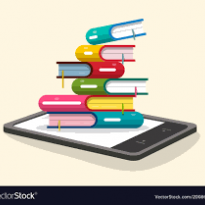 I started reading when I was 6. I was always running and breaking things so my mother found the perfect solution... BOOKS! Though now she says that was the biggest mistake of her life. Anyway, Here I am! I will be writing book reviews from now on. I started reviewing last month on goodreads (I belong to the group who can't afford Amazon). Feel free( I am requesting) to talk/ask about anything book related, but as I said, I just started so you'll end up explaining everything to me. 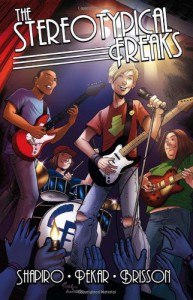 "Life after eighteen sucks"... Dennis Leary once said, and I'd amend that slightly to also include " life before eighteen as well".
The story takes place in a typical High School (East Slade), where everyone is stereotyped in their roles and personalities. Dan (a geek) and Tom (a smart kid) are best friends and a part of their two-member basement band. When a Battle of the Bands is announced at school Dan want to take part, but Tom doesn't because they don't have a lead guitarist and a drummer. This is where the other characters are introduced, Marcel "Mark", a football star and Jacoby (a weird foreign exchange student). Together they make a band called "The Stereotypical Freaks". Because they are stereotyped at school and freaks because they are not what their labels dictate.
"These labels don't define us"
When one of the members reveals a life-changing secret, winning the competition takes on a whole new meaning.
I LOVED the book. It was a normal life comic about four teenagers who are sensitive and are not afraid to show it. When I started to read this book, I thought it would be a fun quick read. I was wrong. I was happy everyone got what they wanted at the end, but it was an emotional journey, for the characters in the book as well as the readers. It was a different kind of comic than I usually read, but it was exceptional in its own way.